The Crest of the Indian Coast Guard 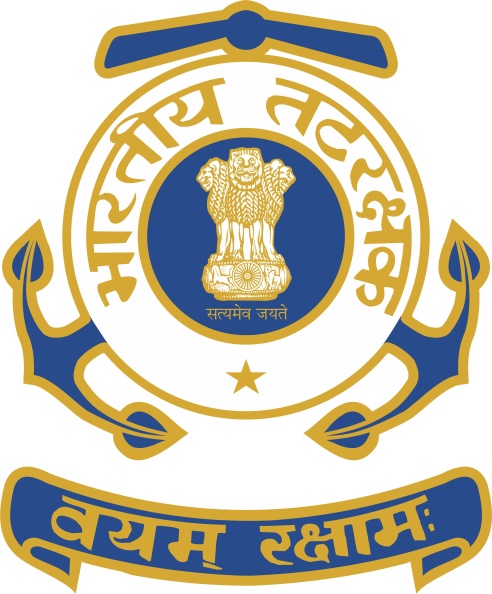 The State Emblem, which is an adaptation from the Sarnath Lion dating back to the time of Emperor Ashoka (273 – 232 B.C.) is on the top of the Crest of the Indian Coast Guard. The original statue has four lions, standing back to back mounted on an abacus with a frieze carrying sculptures in high relief of an elephant, a galloping horse, a bull and a lion separated by intervening wheels. The National Motto "SatyamevJayate” meaning “Truth Alone Triumphs” is inscribed below the Ashoka emblem in gold. The Lion capital itself is surmounted by a “Chakra” (Wheel), which is the symbol of the Sun manifested as time. The Ashoka Capital is within a lifebuoy in white (depicting safety at sea),which enclosed the words “Bharatiya Tatrakshak” in Devanagri script. Two anchors are placed below the lifebuoy and the helicopter rotor on top (all three in blue) depicting the maritime service with an air arm. The scroll placed below has words inscribed in Sanskrit,"VAYAM RAKSHAMAH”, meaning “We Protect”. The Five cornered Star at the base of the Lifebuoy is synonym with the Coast Guard. One corner of the star point upward, two grounded and two stretching on both sides indicating omnipresence of Coast Guard at Sea.