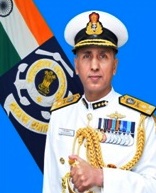 The Flag Officer is a sixth batch officer of Indian Coast Guard and had joined the service in 1985. He has vast sea experience and has commanded different class of ICG ships, including command of Advance Offshore Patrol Vessel (AOPV) ICGS Samar.

In his service spanning 35 years, the officer has held various important operational and staff appointments both afloat and ashore. He was associated with operations during his appointment at Coast Guard Region (West) as Chief of Staff. The Officer was at the helm of Bureau of Naviks, wherein he steered training, management policies and promotion aspects of Coast Guard sailors.

The responsibilities towards ICG charter in the security sensitive state of Gujarat were handled by him as District Commander at Porbandar. He has also directed personal and administrative affairs of the Headquarters Coast Guard Eastern Region as Chief Staff Officer (P&A). In the capacity of Principal Director (Logistics) at Coast Guard Headquarters, the Officer was closely associated with various logistics perspective plans and developments.

The Flag Officer is happily married to Mrs. Nidhi Bargotra and they have one daughter.